US population distribution by states (2013) 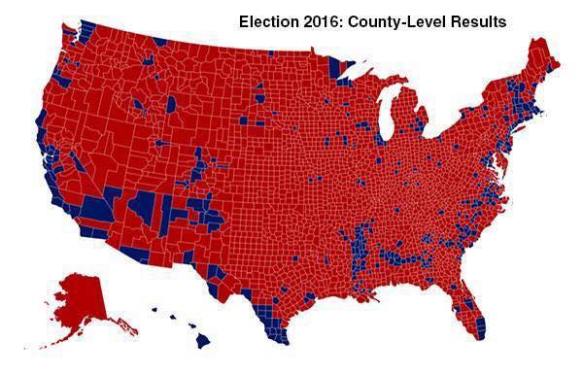 Most U.S. People Live “Near” the Big Water

The next 4 most populous states (MI, NJ, VA, WA, ranked 10-13) have seashore or lakeshore on the Great Lakes, and populations between 7M and 10M (each).

Ranked 14th is AZ, the first landlocked state (population between 6M and 7M).

Of the 16 states ranked 15-30, 7 have seashore (Atlantic, Pacific, Gulf) and 3 have lakeshore (Great Lakes), the remaining 6 are landlocked. All have populations between 3M and 7M.

The last 20 states have populations between 0.5M and 3M. There are 7 states with seashore (Atlantic, Pacific, Gulf), none with lakeshore (Great Lakes), and so 13 are landlocked.

Of the 37 states below rank 13:
all 20 landlocked states are included,
14 have seashore (Atlantic, Pacific, Gulf)
3 have lakeshore (Great Lakes).
<>

Whether Trump or Hillary is US president, Climate Change will continue unabated

In the 2016 presidential election, Hillary Clinton won the population centers and the wealth zones; Donald Trump won the countryside (see maps). The peasants and proletarians revolted against the self-satisfied and arrogant cosmopolitans, and backed an avenging berserker they hoped (hope again!) would save them economically, and thus preserve their insular and primitive cultures. This revolt is a reaction to the supreme failure of the Democratic Party to care about the impoverished and ill-educated lives in the despairing countryside. Bernie Sanders would have swept this election. The American people lost the general election to the billionaires and the corporations on 25 July 2016, at the DP convention in Philadelphia. The Trump presidency is the direct result of Hillary Clinton’s ambition and the Democratic Party’s complicity with it.

In my view, we will never stop (let alone reverse) climate change, because the addiction to fossil fuels is universal and incurable. Basically, all the personal excuses worldwide boil down to something within the range of: “I’ve got to have it to survive,” and “I’ve got to have it to profit.” Climate change is the exhaust product of capitalism (whether of “free market” or “command economy” style), and no one is willing “to miss out” on getting more power NOW to “survive” and “profit.”

Socialistic frugality to economize and thus forestall climate change could only happen under a “dictatorship,” with a top-down enforced regimen of shared economics, as under Fidel Castro in Cuba. This is impossible globally, as well as in almost every country.

I have no doubt that essentially the same policies and trends would have occurred under a Hillary Clinton presidency as under a Trump presidency. There would be big differences of style between the two, but little differences of timing. The desperate peasants who voted for Trump simply hoped to get some economic lift by getting skilled-labor jobs in Trump’s promised America-first unleashed smokestack economy (factories and mines on the prairies and in the hills, but also Wall Street pulling the strings). There was no such hope for the peasantry in Hillary’s likely economy of outsourced smokestack industries, H-1B domestic tech industries (IT and Bio-tech) and an unleashed financial industry (high-tech along the coasts, and investment banking everywhere). It’s kind of like picking between “Ford” and “Chevrolet” economies with billionaires in the drivers’ seats either way. The gas, oil and coal will be hammered, pumped and dug up, and burned to inflate fortunes.

The one advantage of a Trump presidency and economy is that it will hit most of us with an instantaneous jab of pain and burning sensation, like the sting of a bee puncturing public consciousness, and cause an immediate mass reaction seeking to swat the offender.

In contrast, a Hillary Clinton presidency and economy would hit us like the stealthy sting of a tick, which regurgitates a highly infectious anticoagulant during its bite so it can linger draining your blood until you eventually become aware of a persistent pain and a possible enduring disease.

It was never in the public interest to support Hillary Clinton to “avoid” Donald Trump, whether before or after the November 8 election. Post-election efforts going into fantasies promoting Hillary (importuning Electoral College electors to switch their votes in favor of Hillary, while sopping up conspiracy theories aiming hatred at the Russians, and blame away from the real culprits) would be better spent on planning resistance to Trump’s policy initiatives. I suspect that within two years (mid-term elections) that disillusionment with Trump will have already become visible among the ranks of Trump’s populist supporters. Then the members of the Sanders Revolution will have the opportunity to begin combining forces with disillusioned Trump supporters, and ideally also reformed and reeducated Hillary supporters (though these are likely to be the most obdurate, i.e., brainwashed), and a second populist wave might beneficially inundate the electoral spectacle by 2020.

However the politics of the next four to eight years unfolds, two conclusions seem clear:

You cannot have capitalism without gross inequity and climate change.

You cannot have socialism with ignorant, greedy and self-centered people.

2 thoughts on “Climate Change Is Inevitable With Trump Or Hillary”