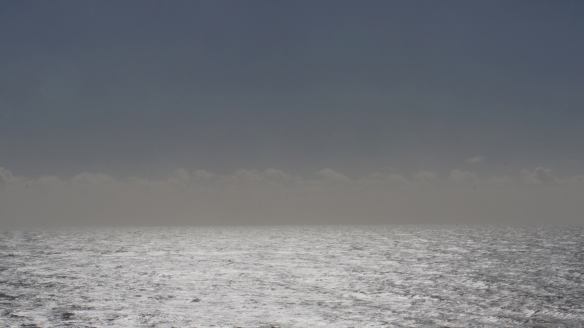 Too Many People, or Too Much Greed?

During the dark early morning hours of a September 27 a few years after the Second World War, a passenger ship cruising calm South Atlantic waters struck a drifting forgotten mine, was violently breached, and quickly sank before any distress signal could be broadcast. Daylight found 26 survivors massed in, or floating in the sea around, a small lifeboat built for 12. This is the opening scenario to the 1957 British film Abandon Ship! (also called Seven Waves Away, or Seven Days From Now); and is succinctly presented in this brief clip (https://youtu.be/xVm2dbMdXRs).

The weight of those on board along with the weight of the survivors in the water clinging to the sides lowered the boat in the water and put it in grave danger of swamping and capsizing with any wave action, and certainly in the event of a storm. There were only small stores of food and fresh water in the boat, scant medical supplies, no communications gear, no sailing tackle, and only oars. Many of the survivors were injured, weak, frail and old. What were they to do?

They could sit tight and drift to conserve their strength and minimize food consumption, and hope for a chance meeting with a rescue ship before succumbing to their wounds and infections, exposure, thirst and starvation. However, with the first increase of wind and wave action, and any turn in the weather, they would surely all be dumped into the sea and soon drowned.

They could try rowing to the nearest shore, Africa 1,500 miles away, but the bodily energy reserves of the hardy people who would have to provide the propulsion by rowing would be drained away long before reaching land, because of the drag of the total weight of humanity massed about the boat. Also, the boat would still be at risk of swamping should the weather turn for the worse.

The only remaining alternative was to abandon those people least able to contribute to propulsion, so a smaller number of the fittest people would have the water and food stores to themselves, and amount to a lower weight to be transported with a boat that was higher in the water and much more stably seaworthy. But, how many and who would be cast adrift, and who would make those choices?

The officer in charge, Alec Holmes, reluctantly comes to accept the logic of the third alternative. He ensures that he and the seamen under his command are in possession of the sole firearm on board, and sequentially set the weakest among them adrift as their voyage proceeds, as the sick and injured worsen, and as their supplies dwindle. One woman reflects on the cruelty of the powerful in their sacrificing of the weak by saying: “Why are the wicked always so strong?,” and that “an atomic scientist, a brilliant playwright, and a famous former opera singer have been sacrificed to save two ‘apemen’, a racketeer, and a devout coward.”

We could think of this lifeboat as a microcosm of our Planet Earth, and its overcrowding with desperate survivors as representative of a world population explosion facing the combined biological and geophysical catastrophe of collapsing habitability brought on by the global warming climate emergency, and a rapidly shriveling biodiversity.

It took over 200,000 years of human history for the world’s population to reach 1 billion, and only 200 years more to reach 7 billion; world population was estimated to be at 7.7 billion by April 2019. 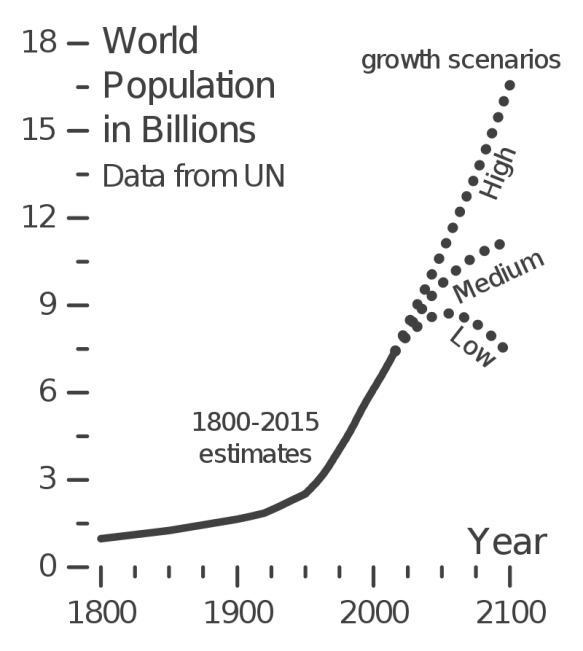 I have heard from several of my critics that Earth “needs to” be quickly depopulated down to, say, its 1974 population size of 4 billion, in order to preserve its “carrying capacity” by leaving half of Earth’s area “wild” to both solve our global warming and biodiversity depletion problems, and thus maintain our prosperous nations’ current styles of inequitable capitalist societies within the larger context of a continuing human civilization. Just how this depopulation is to be carried out, and by who, is not mentioned by these critics, hence this essay.

Many factors affect population growth and the magnitude of the Earth’s carrying capacity over time, among them is a positive feedback loop between demographic growth and technological development. Human knowledge (e.g., science) and technological development (e.g., machines, drugs) improve over time and boost human survival, which helps accelerate population growth. Talented individuals, who can devise intellectual and technological improvements, are statistically more likely to arise from and survive to maturity in larger populations living at more advanced levels of development. The intellectual and technological innovations of inventive individuals make it possible to amplify the Earth’s carrying capacity as the population grows, for example by tamping down the incidence and virulence of diseases, and by increasing agricultural yields. However, there is no guarantee that such a positive feedback can cycle forever, and current trends would seem to indicate that this feedback loop is losing its momentum.

What are humanity’s options for forestalling its own extinction at least into the next century? Given human nature, and our many many tribal rivalries, ideologies, fears, superstitions, bigotries, and diversities of moral courage and of moral weakness, what are likely to be the dominant choices for collective actions for societal survival?

We homo sapiens could as a species choose to cooperate globally to simultaneously raise the living standards of the most impoverished — and majority — of Earth’s people, and reformulate our civilization’s manner of energy generation and economic operation, from its highly inequitable feudal capitalism to a highly equalized world eco-socialism: to halt the poisoning of our global environment with waste heat and carbon dioxide from combustion; waste methane from industrialized meat consumption and a melting degradation of the biosphere; and waste chemicals and plastics from industrialized farming and the detritus of industrialized consumerism. In other words, we could unite to share out the Earth equitably while also maximizing the efficiency of the global use of natural resources by quickly reforming our civilization — our methods of finding, extracting and using energy, and the forms and purposes of our economics — so as to be in sustainable balance with natural processes and cycles, all for the purpose of allowing Lifeboat Earth to row or drift for as long as possible with a minimal sacrifice of human decency and human life.

Such a course would obviously include fully subsidized healthcare for everybody, with every form of contraception including abortion on demand, and with all forms of maternity care; also subsidized and universal quality education from preschool through trade schools and university, guaranteed minimum livable income, and fully subsidized elder care and for end-of-life choices. It would be a crime to be a billionaire in such a society, and the capitalism of today — the factional and privatized exploitation of the public — would be extinct since the essence of this society would be the overlapping of relationships of mutual help and consideration on many scales. Capitalism is the ideology of parasites. The people of such an idealized world eco-socialist society would be morally committed individuals who would take it as a given that if human extinction were imminent and unavoidable, they would all share the same fate in solidarity: honor till the end, whenever that would be whether sooner or later.

Human history up to the present suggests that this “all in till the end” type of world socialism is a very unlikely future for us globally, though small isolated pockets of it might develop within the much larger drama of human civilization. While there is always a real chance that a ship at sea would happen upon a lifeboat and rescue its shipwrecked survivors, there is no chance for a rescue of humanity drifting toward extinction aboard Lifeboat Earth, through a massive intervention by fantastically powerful Space Aliens. Our salvation like our damnation is up to us and only us.

So, we can reasonably suppose that the management of Lifeboat Earth will proceed as the wickedness of the powerful in sacrificing the weak to lonesome and fatal abandonment so that the capitalistically fittest can maximize their span of prosperous and even luxuriant survival. Such management of Lifeboat Earth would be (and is) very fractious because greed as a fundamental motivation intrinsically creates dissension, disunity and conflict. Many scales of exclusion would be evident: the impoverishment of a national public and its exclusion from political decision-making by a wealthy and narrowing oligarchy; the oppression by a dominant racial or ethnic population of the weaker ethnic populations and minority-type people it has dominion over; and the exploitation of weaker countries and less-developed economies by strong, advanced and domineering nations. We need only mention the white supremacy domestic policy, and militaristic economic and foreign policy of the United States, the Han supremacy policy being applied by the ruling Chinese on the Uyghurs and in Tibet, the pitiless grinding down of the Palestinians by Zionist Israel, and the migrant streams erupting out of Central America and Africa to escape from starvation and death squads, to stimulate the recollection of numerous other examples of the wickedness of the strong in the management of other regional compartments of Lifeboat Earth. We might even live to see American and European navies shelling refugee ships at sea, and troops of their militarized police summarily executing undocumented aliens breaching their borders, to thwart the arrival of waves of destitute and desperate migrants. Such atrocities would be manifestations of extreme “them or us” end-times panic by the power-clinging wicked.

What can the concerned, morally oriented, largely disorganized and politically marginalized citizens of the world do to help Lifeboat Earth complete its journey — however long or short that may be — in a more humane manner than is occurring today, and certainly than might be its most horrible dénouement? My best and least presumptuous answer is: care enough about the situation to become aware of it, and then do whatever you are willing to do, and have the opportunity to do, to inject greater degrees of awareness, decency and compassion into the small cells of world society that sense your presence. The details of this — whether political, economic, social, intellectual, action-oriented or artistic — depend on the individual, it’s not for me to prescribe.

It is entirely possible that the all-inclusive utopian world of eco-socialist solidarity would have a shorter lifespan than a wicked world for just a few wealthy minorities who pitilessly exclude large segments of humanity, which they disfavor with racial, ethnic and materialistic (anti-poverty) bigotries. If the geophysical gear-train of climate alteration has now been irrevocably set to destroy habitability for humans (and who really knows?), then the eco-socialist world will ultimately fail despite its best efforts. But, it would have been the most enlightened and honorable of possible human civilizations during its lifetime. The wicked world of exclusionary wealthy minorities could extend its lifetime under the same geophysical conditions by culling the human population through combinations of cruel neglect and malicious assault — with no human solidarity and no honor. The partisans for the wicked world of exclusionary wealth justify themselves by claiming “there are too many people,” while the partisans for eco-socialist world solidarity justify themselves by declaring “there is too much greed.” I recognize that the population explosion is a fundamental driver of our combined climate, biodiversity and carrying capacity emergency, and I also agree with the eco-socialists: Earth has too many greedy people.

Today, our Lifeboat Earth is drifting toward becoming a more wicked world of exclusionary survival for exclusionary wealth, but this drift is being resisted by many forms of spirited, morally-based and eco-socially oriented activism. That activism is where the soul and the honor of humanity are to be found.

2 thoughts on “Too Many People, or Too Much Greed?”