In 1916, Albert Einstein (1879-1955) wrote a book in German for the general public about his theory of relativity, and he continued to add to it until its fifteenth edition in 1952. That book is called Relativity, The Special and the General Theory, and its English version is an “authorized translation by Robert W. Lawson.” That fifteenth edition has been in continuous publication since, and its copyright is held by “the Estate of Albert Einstein,” dated 1961.

It is a wonderful book. “The author has spared himself no pains in his endeavor to present the main ideas in the simplest and most intelligible form,” and Einstein’s exposition is a model of what every scientist should strive for in the clarity of their writing, and every journal should seek to publish to serve humanity’s interest in the widest dissemination of knowledge.

The particular edition of this book that I will comment on is published by Three Rivers Press, which is a trademark of Random House, Inc., and this edition of the book has the identification code: ISBN 0-517-88441-0. The publisher (NOT Albert Einstein!) — somewhere between the editor and the typesetter — has introduced errors into the text, and the purpose of this article is to show the corresponding corrections (to the three errors I have noticed). Page numbers are cited for the specific edition noted here.

Page 46 (Theorem of the Addition of the Velocities. The Experiment of Fizeau), footnote, in the second sentence (at the third line of text), a second closing parenthesis is needed for the expression for W, which should then appear mathematically equivalent to:

Note that the velocity w (of light in a motionless liquid) is much much greater than the velocity v (of the liquid in a tube). The speed of light in a vacuum is c. W is the “addition of velocities,” of light with respect to a liquid that is itself flowing along a tube, where W is observed from the frame of reference of the tube.

Page 129 (The Structure of Space According to the General Theory of Relativity), footnote, in the second sentence (at the third line of text), the symbol (label) “x” should instead be the symbol (label) “ƙ,” the Greek letter kappa. This makes line 3 consistent with the mathematical expressions in the previous lines of the footnote.

Page 124 (The Possibility of a “Finite” and Yet “Unbounded” Universe), the equation shown in the book is multiply wrong. The equation should be a mathematical statement that the ratio [circumference/surface diameter] = [pi] x [sine(nu/R)/(nu/R)], and this is always less than or equal to pi.

The Greek letter “nu” can look like the lower case script “v,” which appears in the denominator of the erroneous formula on page 124. The first error to correct in that formula is to replace the lower case “r,” which is shown in the argument of the sine function, with the same “v” as in the denominator (and which “v” I will call “nu” further below).

The second error to correct is to replace the equal sign (=) with a multiplication symbol (×, or ∙), or to make that multiplication implicit by eliminating that equal sign and enclosing the entire ratio (corrected as above), to the right of the pi, within parentheses or brackets.

The lower case “r” that Einstein uses on page 125 refers to a quantity (an arc length along a “great circle,” my “radial arc x 2”) that is shown as the product 2x[R]x[theta] in the display that follows.

The following display shows what Einstein is describing on pages 124-125, and how the equation shown above comes about. The quantity (ratio) that should be printed on page 124 is shown within a hatched bean-shaped outline in the display. I leave it to you to enjoy that display, and I hope the trustees of Einstein’s legacy can cause future printings of “Relativity” to be free of textual errors. 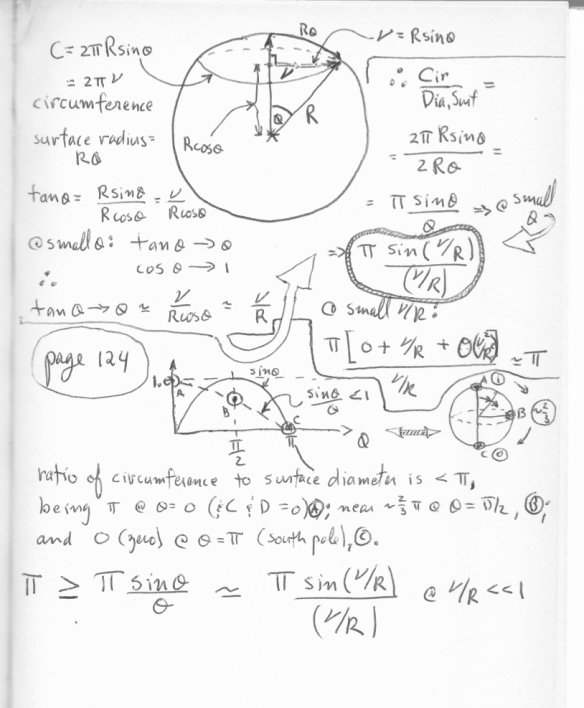 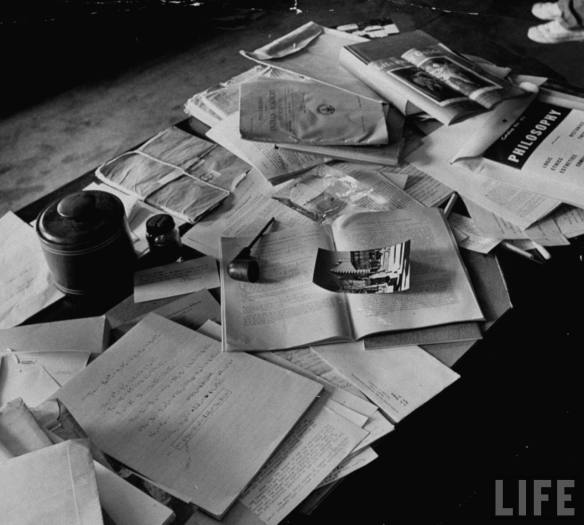 This is a photograph of Albert Einstein’s desk on 19 April 1955, the day after he died.