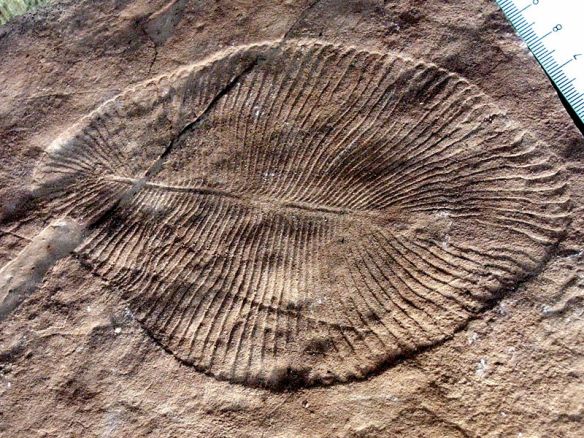 Dickinsonia costata was one of nine species of Dickinsonia life forms, which resemble bilaterally symmetric ribbed ovals, which lived during the Ediacaran Period (635–542 Mya) and which went extinct, along with all the biota (life forms) of that period, by the beginning of the Cambrian Period (which occurred during 542-488 Mya).

The Ediacaran biota were enigmatic tubular and frond-shaped organisms living in the sea, and are the earliest known complex multicellular organisms. The adult phase of life in most Ediacaran species was spent at fixed individual sites, such as barnacles, corals and mussels do today. In contrast, the Dickinsonia moved around to feed.

My curiosity about Dickinsonia costata was sparked by reading Richard Dawkins’ description of this organism in “The Velvet Worm’s Tale,” which is in his book The Ancestor’s Tale, A Pilgrimage to the Dawn of Evolution (highly recommended).

What intrigues me is the similarity of Dickinsonia costata’s ribbed planform to the mathematical result known as the conformal mapping of a circle in cylindrical coordinates to a line segment in cartesian coordinates. I wrote about my use of this mathematical transformation to solve a problem in electrostatics in the blog entry 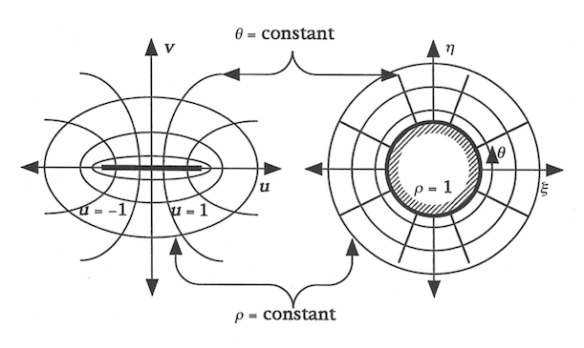 The equations of the transformation conformally map each point of the radial (radius-angle) two-dimensional geometry, from the unit circle out, to corresponding points in the cartesian (length-width ’square grid’) two-dimensional geometry, from the line segment out. An inverse conformal mapping relates each point in the planar cartesian geometry to a corresponding point in the planar cylindrical geometry. Note that the interior of the unit circle corresponds to the collapsed now infinitesimal ‘interior’ of the line segment, and these spaces are excluded from consideration.

This conformal mapping is very useful in solving the problem in electrostatics of calculating the falloff in voltage from a flat strip electrode (the 2D part is the plane with finite line segment) that is infinitely long in the third dimension (“into” the paper or screen of the diagram). Physically, the ellipses of increasing circularity with distance from the line segment are contours (“surfaces” in a 2D view) of constant voltage. If the line segment (strip electrode) has a positive voltage, then the equipotential ellipses have decreasing voltage with increasing distance. If the line segment electrode has a negative voltage then the ellipses increase in voltage with distance. The rate at which voltage falls off from its value at the strip electrode is most rapid close to that electrode, and decreases (flattens out) with distance. The hyperbolas, which cross the elliptical equipotential contours, are the paths of greatest increase (for +) or decrease (for -) of voltage from the far distance into the line segment. The hyperbolas are lines of electric field, which is high where those lines are steep near the electrode, and which is low where those lines are flat, out at great distance.

If we now imagine the unit circle and its corresponding line segment (in the above) to be the sensing centers of living and mobile organisms, then we can see that the radial rays and hyperbolas, respectively, are the paths of fastest communication with and reaction to the surrounding environment, and that a bodily bounding circle or ellipse, respectively, is a contour of simultaneous sensation of that external environment. Here, I am thinking of organisms that are flat and that do most of their living and moving two-dimensionally, that is to say more or less perpendicular to gravity.

The cartesian ‘strip electrode’ form of Dickinsonia costata gave it a head and tail (a fore and aft) as well as a left and a right (a bilateral aspect). In fact, the left and right sides of the Dickinsonia organisms were not mirror images of one another, but instead had an alternating pattern according to glide reflection symmetry. That is to say, a boundary rib or ridge or depression line on the right side emanates from the central line segment at a point midway between similar boundary hyperbolas on the left, and vice versa.

The fore-and-aft left-and-right layout of the Dickinsonia species meant that they had an internal coordinate system with which to reference the headings (directions) of sensations of the environment, and reactions to it in the form of motions.

It is probable (that is to say my uneducated guess) that they ingested nutrients by absorbing them (sucking them up) through their undersides from the algal mats they skimmed over in the sunlit shallows of Precambrian seas.

They could have moved straight ahead by alternately expanding the forward part of their bodies while contracting the rear, then contracting the forward segments (between the hyperbolas) while expending the rear ones, to produce a wave-like forward motion. Clearly, some point of contact would be necessary with the surface below Dickinsonia in order to gain traction for motion. Another possibility for motion would be an oscillation of the (nearly) elliptical bounding edge of the body into a wave-train that moved from head to tail (fore to aft), as a flounder, sea ray or skate does today.

Paleontologists have speculated that the Dickinsonia segments between hyperbolas were filled to overpressure with fluid (compared to the seawater exterior), so it is reasonable to speculate that these inter-hyperbola segments were plenums whose volumes (and widths) were modulated hydrostatically, for forward motion and for turning. A left turn could be effected by expanding the forward right side while contracting the forward left side, and simultaneously contracting the aft right side while expanding the aft left side. A right turn would require the opposite pattern of contractions and expansions.

It is possible that improvements in responsiveness and maneuverability were gained through evolution by collapsing an earlier cylindrically symmetric planform into the fore-and-aft left-and-right planform of the ‘strip electrode’ Dickinsonia organisms. If so, then Nature has made elegant use of the conformal mapping of a circular center of life into a linear one.