This article is identical to:

Numbers beyond the year 2020 are speculative (by the sources cited). Numbers for oil used to date (globally) are less certain than the numbers for population and average global temperature. The temperature history has been simplified (you can find very detailed data if you wish). Oil extraction by fracking since ~2000 (and since this article was originally published, in 2004), has drastically changed the numbers for oil production in the United States.

Future historians will look back on the 200 years of the 20th and 21st centuries as the Oil Period in world history. During this time, the latent heat of buried petroleum will have been mined and released into a dramatically warmed and crowded planetary surface. In the century from 1950 to 2050, the world will have shifted from one with 2.7 billion people, 96% of its petroleum reserves intact, and insignificant global warming, to one with perhaps over 9 billion people, less than 10% of its petroleum reserves left and a 2 °C average global temperature rise. For perspective, during the last Ice Age — about 16,000 years ago — the average global temperature was 4 °C (7 °F) below the 1860 to 1920 average of 14.7 °C (58.5 °F).

What will be the politics of a hot, crowded world without oil, and possibly on the brink of abrupt climate change?

Within the sixty years from 1970 to 2030, we will have used up about 80% of the world’s oil, the peak rate of production occurring now, during these few years about the turn from 20th to 21st century. Half of the world’s oil endowment has already been used. Efforts at conservation and improved extraction technology may extend till the years 2007 to 2013 when the oil production rate will peak (at about 26 billion barrels/year, or 70 million barrels/day). Inevitably, beyond this time the rate of oil extraction will diminish.

The bell-shaped curve of oil production rate variation over time is called the Hubbert Peak, in honor of the late geophysicist who — in 1949 — first predicted the brevity of the fossil fuel era. Hubbert’s 1956 prediction that US oil production would peak in 1970 and then decline was scoffed at, but he was proven exactly correct. (1), (2)

Today [15 March 2004], over 87% of the oil endowment in the continental U.S., and over 95% of that in Alaska have been consumed. America uses 28% of the world’s yearly oil production, producing 12% domestically, and importing the remaining 16%. Americans consume oil at six times the rate of the world average (25 versus 4 barrels/person/year). America imports oil to supply 29% of the energy it consumes, domestic oil supplying another 12%, so that 41% of our energy comes from oil. This fact is fundamental to national planning. (3), (4) 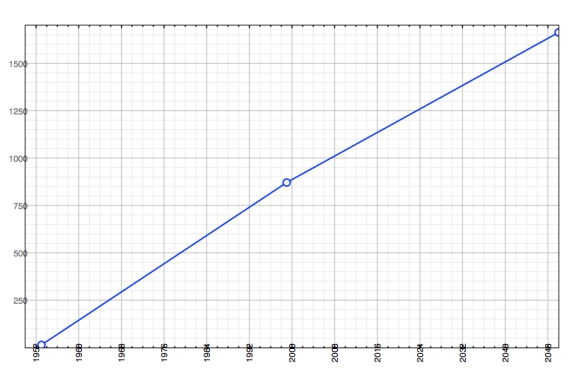 Oil used (accumulated giga-barrels, GB) by a given year (estimated)

World population (billions, B) vs. year

It is interesting to view the finely-detailed temperature history presented by the United Nations Environment Programme, and to imagine the warming trend beginning in 1920 as reflective of the oil boom then underway, as the industrialized nations moved from coal to petroleum for their energy; and to the warmth during WWII, which was not equaled until the 1980s.

Is it possible to directly relate temperature rise with human activity? For example, linking fossil energy, greenhouse gases, and global warming? What about fossil energy, industrialized agriculture, energy-intensive social systems and human population? Finding causal links to global warming is a scientific problem of great complexity, and one that has engaged many scientists for at least two decades. (9), (10)

However, without appealing to causal arguments, it is sometimes possible to show that trends for two phenomena coincide. If so, some limited insight might be found by contemplating this.

The growth of human population, the depletion of oil resources and the rise of global temperature each mirror one another to a remarkable degree, a result that can be arrived at from the data and projections already described.

The world population of 2.7 billion by 1953 can be taken as a base that required negligible petroleum energy to produce. The addition of people beyond this level is fueled at a rate of 264 barrels of oil per person.

So, population minus the base equals cumulative oil production in barrels divided by 264 (equation 1).

For example, today’s population of 6 billion required the expenditure of 871 Gb (Gb is for Giga-barrel, or 1 billion barrels); the actual consumption by January 1999 was 857 Gb. Similarly, a projected population in 2050 of 9 billion would coincide with an accumulated depletion of 1,663 Gb, or 95% of the estimated 1,750 Gb of the world’s oil endowment.

The actual population and cumulative oil production data between 1950 and 2000 correlate startlingly well with the proportionality and offset (base population) given here. The projections to 2050 also correlate extremely well, but of necessity they contain uncertainties only time can clarify.

By direct comparison, the trends of temperature rise above 14.7 °C (the pre-1920 plateau) and population growth mirror each other after 1975 with a proportionality of 3.3 billion people per °C.

So, the difference of population minus base, divided by 3.3 billion equals the temperature difference above 14.7 °C (equation 2).

By a ratio of the previous two proportionalities, one finds that for each 870 Gb of oil produced, the global surface temperature rises by 1 °C.

Three proportionalities: 264 barrels/person, 3.3 billion people/°C, and 870 Gb/°C, correlate the data and projected trends in world population (above a base of 2.7 billion), cumulative oil production and global warming (above 14.7 °C). Population and oil production are correlated from 1950, while all three quantities are correlated after 1975.

Are we to believe that these correlations will remain intact until the world’s oil is exhausted? Will we really age to 2050 with an accumulation of 9 billion people, no petroleum, and unchanged climate despite a heating of unprecedented magnitude, comparable to the cooling of the Ice Ages?

Many find it easy to fantasize from this point: ice caps melt, oceans swell, shorelines recede so that countries like the Netherlands and Bangladesh disappear; jungles and deserts expand but in different locations than at present, waves of extinction and population-drop sweep the animal kingdom, equatorial zone agriculture collapses, massive migrations spark wars; America, Europe and Japan militarize heavily, including space, to capture foreign resources and repel invaders and refugees; America invades Canada because the ‘corn belt’ has moved north to the former tundra; the exploding price of oil spurs a frenzy of invention into synthetic fuels and alternate forms of energy, as well as a return to coal and a depletion of timber; sunny territory is invaded and conquered by foreign armies, and used for solar energy plantations by a colonial elite who export the accumulated energy to their imperial homelands.

In fact, we don’t know what will happen, or when. But, we can “use what we know” to begin rational planning now for a transition to a new method of powering our society (particularly transportation systems), and of weaning ourselves from imported energy and the imperialism it seems to require. It would also be wise to rearrange our politics, that is to say remove the inequities between economic classes, so that our nation can retain its integrity while facing the environmental, economic and political pressures to be expected with a shift to a post-petroleum world. The added stress of a civil war during such a time would be tragically cruel.

Such planning is unlikely — at best very difficult — in America, because business has a quarterly-profits myopia, and the electorate in the suburban American “heartland” is thoroughly indoctrinated in capitalist ideology, with an anti-socialist “every man for himself (and women too)” attitude. The world’s revenge for our past imperialism may well be realized by our lack of social planning for the inevitable shocks of the collapse of the oil-powered economy, accompanied by a climate shift.

There are no physical reasons, no “laws of nature” that prevent us from devising an alternative way of organizing and powering our American society. There would certainly be many technical problems and intellectual challenges, but we have the means to prepare for what we can predict is likely to unfold. An enduring society would do this on a continuing basis. To me, that is socialism. Sometimes it’s as simple as seeing that everyone is in the boat, and they’re all rowing in the same direction.

In looking at our political figures, which ones seem to concern themselves with just the self-interest of one or another faction, and which ones seem to concern themselves with the good of the “whole boat?” We need leadership that can draw our involvement into long-term, democratic, social planning that achieves dependable commitments. We need such a process to bear fruit this decade, and we need a well-understood general plan for embarking on an intentional social transformation. If not, we will be the witless victims of a foreseeable catastrophe of our own making.

10.  “What is Climate Change,” Government of Canada – http://www.climatechange.gc.ca/english/issues/what_is/index.shtml (as of 24 February 2004).