If greenhouse gas emissions ceased entirely in the year 2047 (in 27 years), just as the relative temperature was nearly 1.5°C above that of 1910, then the subsequent trend of relative temperature would still be a rise but at a decreasing rate over time, and with an asymptote of 6.2877°C, which would essentially be achieved by the year 3160. Projections here are that for

The “no emissions” asymptotic temperature rise of ~6.29°C (by year 3160) would mean the average global temperature would be comparable to that of 55.5 million years ago at the very beginning of the upswing in temperature during the Paleocene-Eocene Thermal Maximum (PETM). The PETM began at a temperature about +4°C above that of our 1910 datum, and shot up to somewhere in the vicinity of +8°C to +12°C above it, and even possibly +16°C above it. It then took 200,000 years for the “excess” atmospheric CO2 to be cleared away by rock weathering, and the average global temperature to return to +4°C above our datum. This all occurred during the early Eocene geological epoch (which occurred between 56 to 33.9 million years ago).

In the post 2047 “no emissions” model used here, the albedo (the light reflectivity of the Earth) would still be higher than today because of increased reflective cloud cover, because of higher temperature.

Though the fallout of light-reflecting pollution grit would occur quickly in and after 2047, which is an albedo-reducing (warming) effect, it is not considered significant in relation to the reflective effect of the temperature-enhanced cloud cover (a cooling effect). The Earth’s albedo is dominated by cloud cover.

The temperature-enhanced reduction of ice cover (an albedo-reducing and thus warming effect) is always insignificant in comparison to the effect of cloud cover.

The infrared (heat) absorptivity (parameter F in the model) remains unchanged after 2047 because no new greenhouse gases are added to the atmosphere after that year (hypothetically), and because carbon dioxide (CO2) remains present in the atmosphere for a very long time (once the oceans are saturated with it), on the order of 150,000 years or more.

As noted previously (in “Living With Global Warming”), because of the immense thermal inertia of the biosphere and its climate system, the effect of an abrupt cessation of greenhouse gas emissions would come on slowly over the course of hundreds of years [an e-folding time of 240 years].

As will be evident from Figure 3, below, if we cared to limit temperature rise as much as possible for the sake of future generations, we could never cease emitting greenhouse gases too soon.

On the basis of the modeling described here, it seems impossible to ever limit the ultimate rise of temperature to below +2°C relative to 1910.

If we ceased all greenhouse gas emissions this minute in the year 2020, we might be able to keep the average global temperature from ever rising above +5.8°C, relative to 1910, in the distant future.

It will be interesting to see what the state-of-the-art supercomputer numerical models project as possible future “no emissions” temperature rises, as those models are further refined from today.

The technical details of how I reached these conclusions now follow. This discussion is a brisk and direct continuation of

For a description of the parameters used in my model, and their numerical values, see

A Simple Model of Global Warming
26 May 2020
https://manuelgarciajr.files.wordpress.com/2020/05/global-warming-model.pdf

The previous model of temperature rise relative to 1910 is called “example #5” because it was the 5th numerical example devised from the general solution of the relative temperature rate-of-change equation. For that model, at relative time =137 years (for year 2047, which is 137 years after 1910):

If greenhouse gas emissions cease entirely in year 2047 (at 137 years of relative time), then:

and the temperature change trend continues after t = 137years with:

gamma = 0, (since strictly temporal increases/effects of pollution have ceased).

The relative temperature from t=137 on is now given by: 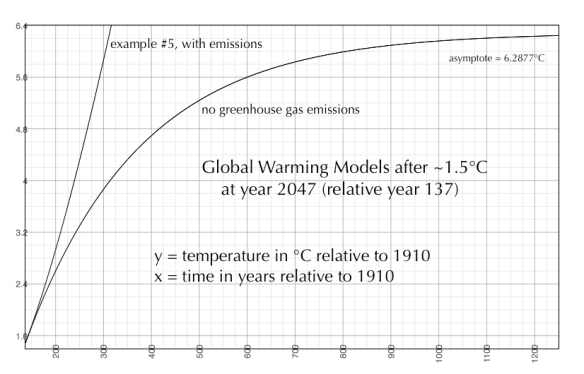 Note the following points on the “no emissions” relative temperature curve:

The “no emissions” relative temperature curve after 1.5°C has an asymptote of 6.2877°C.

For descriptions of the PETM, see:

1 thought on “Global Warming After 1.5°C Without Emissions”