I continue to model the accumulation of carbon dioxide (CO2) in the atmosphere, because the topic fascinates me.

The point of this study is to see how a reduction of anthropogenic emissions, as by the mathematical function assumed, would influence the subsequent reduction of CO2 accumulation in the atmosphere.

The equation describing the accumulation of carbon dioxide in the atmosphere is based on these assumptions:

– 70% of the emissions accumulate in the atmosphere,

– 30% of the emissions are immediately absorbed by the oceans (surface waters),

– the only sink (mainly photosynthesis) is characterized by a relaxation time of 238 years (a characteristic time scale for the absorption process),

Figure 1 shows the resulting projected temporal profile of atmospheric CO2, in units of ppm (parts per million). Also shown is the emissions function, E(x), scaled by 50x GtC/y. The unperturbed baseline concentration is assigned as 277ppm. 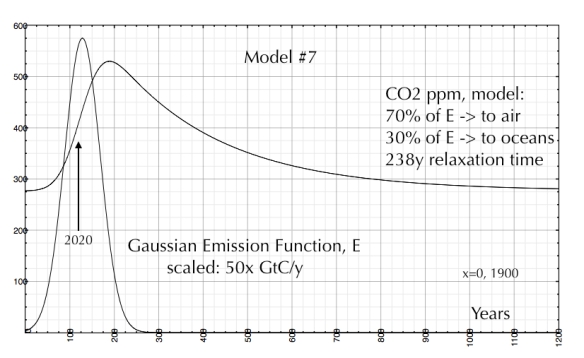 Choosing a longer relaxation time (e.g., ~1000y) would significantly reduce, or eliminate, the decay of the concentration over time (the air CO2 would “never” go away). A long relaxation time would be the case if weathering were the dominant absorption phenomenon (with relaxation time ~12,000 to ~14,000 years), because the photosynthesis and absorption by the oceans sinks were saturated (as was the case during the 200,000 year-long clearing of atmospheric CO2 during the Paleocene-Eocene Thermal Maximum, PETM, 55.5 million years ago).

Figure 3 shows the increase in global temperature, in °C, corresponding to the CO2 concentration profile, shown above. 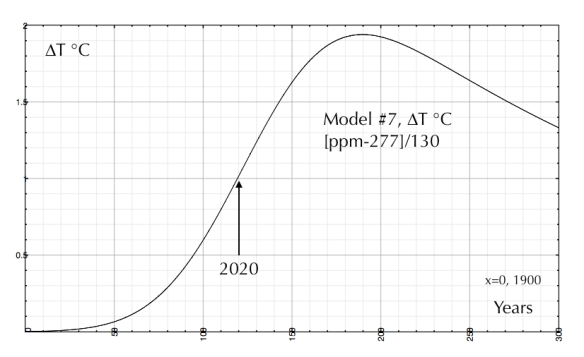 It is obvious that if the future reality of anthropogenic CO2 emissions is an increasing trend, that the consequent time profile of atmospheric CO2 concentration will be a continuously rising trend as well. That would mean higher global temperature increases, and sooner, than those shown here.

The Gaussian emissions pulse used here is an “optimistic” scenario in that the annual rate of anthropogenic emissions peaks in 8 years, and then decreases nearly symmetrically to its profile of increase prior to 2028.

This scenario would have us avoid crossing the +2°C threshold. But, the global warming would remain above +1.5°C for the 130 years between 2042 and 2172, undoubtedly degrading many environments.

The model CO2 concentration profile found here matched data (measurements by NOAA); quite well since 2000, and adequately before that to 1960.

The important implication of this model is already well-known: if we begin reducing anthropogenic CO2 emissions very soon, and continue doing so at a steady rate so as to eliminate them completely within a century, we can avoid having Planet Earth warm up by a total of +2°C, relative to the 19th century.

The corollary to this observation is that if we instead continue increasing our CO2 emissions, it will get warmer sooner for longer.

Also, whatever we do (or don’t do) about CO2 emissions, their accumulation in the atmosphere will linger for centuries. The clearing of this atmospheric CO2 will occur on several parallel timescales:

– capture by the surface waters of the oceans over the course of years, decades and centuries (and eventual sequestration at the sea bottom in a surface-to-bottom mixing cycle of millennial time scale), and

– the chemical reactions of rock weathering (on a tens-of-millennia time scale).

Injecting CO2 into the atmosphere can be done instantly; removing it requires a long time.

So, it would be wise to stop emitting it.

The above report, with the addition of figures showing comparisons to data for the trends of emission rate and CO2 concentration prior to 2020, is available here (PDF file).

2 thoughts on “Another Model of Atmospheric CO2 Accumulation”