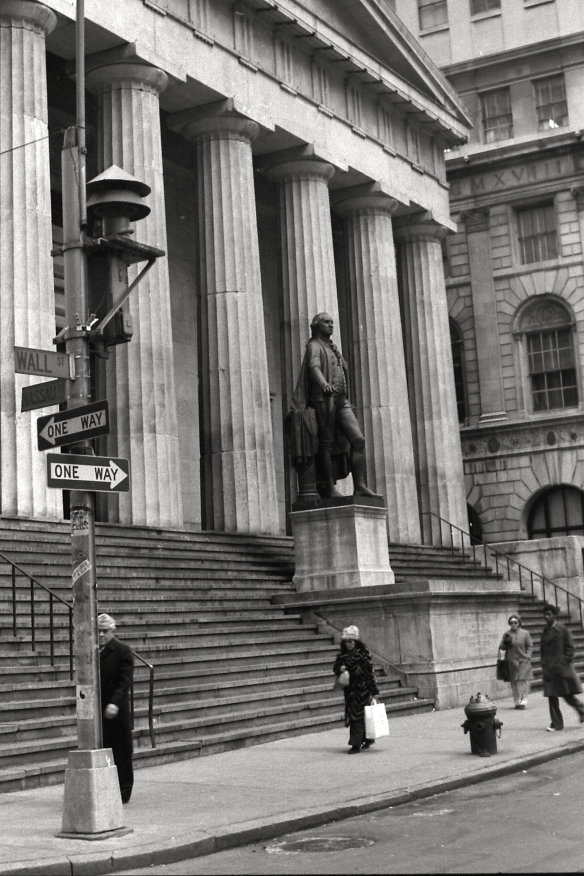 The Conservative Bible and Creed

The Conservative Creed, tenet #2:
Wealth, by definition, means living on capital gains, not wages.
Wages are a necessary evil for the upkeep of the servants.

The Conservative Bible, rule #3:
Human rights can never be interpreted to infringe on property rights.

The Conservative Creed, tenet #3:
Failure to turn a profit or increase share value are the only justifiable complaints against corporations.

The only social value is money.
The only social responsibility is to enrich oneself.
The greatest social problem is government.
The problem of government is to minimize its size and cost consistent with its function.

The most important organizing principle in society is the corporation.
Opposition to corporate society is communism, the most dangerous idea of all time.
Socialism is the excess overhead cost of government from coddling the unproductive.

Conservatism (n.), the irrational fear that somewhere someone you think is inferior is being treated as your equal.

Liberalism (n.), the comfortable presumption that your attitudes mark you as a superior and deserving individual.

“Conservatives” and “Liberals” are the two varieties of capitalists.

The critique by conservatives about “liberal intolerance,” a.k.a. liberal intellectual and political orthodoxy, cuts both ways; “conservative intolerance” to counterarguments is just as prevalent. Both of these simply reflect the ignorance, shallow-mindedness and fears of two large groups of people with opposing biases.

People who are good critical thinkers (not many of these) and open-minded (not many of these either) so as to continuously evolve their opinions and beliefs on the basis of new learning (from whatever source) based on facts (real ones) can enter into political discussions and arrive at useful results. Such useful results can include an agreement about the actual facts of a given issue, and then forthright statements of what each of their personal preferences and biases are, and that their only unresolved differences are about how they each choose to feel about those agreed-upon facts.

A good example for observing this is climate change (CC). The facts are indisputable, the only real differences are how “conservatives” and “socialists” feel about it (“liberals” – one of the two types of capitalists – feel pretty much the same as conservatives about CC, but they don’t really want to admit it). Socialists fear CC more than conservatives, and want to make whatever “economic sacrifices” are necessary to prevent it. Conservatives fear any obstruction to their prime concern of immediate personal enrichment more than they fear any harm from the “slow” changes to Earth’s habitability caused by CC.

With facts forthrightly admitted, two opposing “feelings about the facts” can intelligently engage in discussion to explore these two sets of feelings in an effort to spark deeper thought in the opposite party, which deeper thought (if honest) can induce an individual to critically examine their own sources of willful ignorance and fear.

You can’t change someone else’s mind, only they can do that for themselves. However, a refusal to acknowledge facts is a sign of a closed and socially dead mind. Closed-minded people, who lack the intellectual honesty and courage to be forthright about their actual motivating preferences, biases, fears and bigotries, become hostilely defensive when they sense their biases being challenged. That’s when you get clashes of bullying bluster and bombastic bigotry against snide, arrogant, dismissive and patronizing outrage.

Why are Republicans so mean-spirited? What is it that’s eating at them and keeps them so angry about the pittances the poor get? They have a tremendous envy of the scant happiness the poor may enjoy, and a sad compulsion to act malevolently toward them. Why? How can they have happy lives harboring such bitterness? Why can’t they just live and let live? This is what I have never ever been able to understand. It seems like a wound that won’t heal: a horrible abscess of the soul and a poisoning of the brain. The materialism and wealth accumulation that consumes their lives seem like attempts to create a monumental artificial beauty that masks the repulsive and tragic corruption hollowing out their humanity. This is why Republican-type people seem so fake to me, soulless androids trapped by limited programming for hostility, which is advanced by deceit and masked by denial, and which is based on resentment of those deemed inferior. I think their ongoing and unacknowledged anger is an unconscious eruption of protest and rebellion against the repression of their own humanity.

Liberalism (n.), a political economy that rewards wealth without rancor to the poor.

Conservatives (n.), self-imagined victims of the poor who they persecute in revenge.

Socialists (n.), people who want fairness to govern the politics of their society.

Conservatives and Liberals are both capitalists, want limited government (“freedom”), and are thus anti-socialist (anti-“equality”).

Socialists are anti-capitalist, and thus favor a state-managed economy (“equality”).

Democratic Socialists are a hybrid of Liberals (capitalists) and Socialists (anti-capitalists), their political economy is state-regulated capitalism for the elimination of poverty, managed by a democratic process (“Freedom” moderated by “equality”).

People vs. the Purpose of Government

Every American is guaranteed the right to try to become wealthy on their own. The purpose of government is to protect the wealth of those who have successfully profited from their right to seek wealth. The degree of that protection is proportional to the amount of wealth.

Government is not the problem, the people are the problem. If the government can just defund the people it will have all the money it needs (from taxing the people) to spend on the really important things: billionaire bonuses (need-baseless untaxing); controlling world fossil fuel reserves (power hoarding); wars for Zionist expansion (Modern Manifest Destiny); free Wall Street speculation insurance (single-payer Fortune-care); corporate welfare (job security for oil, pharma, war tech, etc., billionaires); intelligence, robotic and special military forces to control the world (real bomb delivery by White Pentagon House laptop); and domestic occupation forces to corral the people away from wealth-safe, toxin-free and government-only areas (IDF, Internal Defense Force). Public voting remains a problem to government security, and needs to be replaced with access-controlled private voting by purchase of candidates. “Voting is so precious it has to be rationed.”

The people do not have constitutional rights to: dignity, respectful treatment, clean water (everywhere), food (and also real, organic and non-GMO food), health, health benefits (whether publicly funded or employer-based), housing, winter heating, financial security, family planning & reproductive rights (services, equipment and accessories), truthful news media, good public education, full-time living-wage employment, vacations, determine terminal care actions for self with medical assistance (everywhere), and exclusively publicly-funded elections with open primaries and debates open to all candidates. These are all privileges, and privileges are awarded on the basis of competitive bidding by privilege buyers. A variety of private charities offer some of these privileges to the public in many regions of the country, on the basis of their own assessments of individual need and merit.

The burdensome overhead on government for populist benefits must be eliminated to reduce the cost and increase the efficiency of protecting wealth and property proportionately, and of accelerating capital gains.

1 thought on “The Conservative Bible, and Equality vs. Freedom”