On Thursday, 13 December 2018, Greta Thunberg, a 15-year-old climate activist from Sweden, addressed the U.N. Plenary Session at Katowice, Poland, to condemn global inaction in the face of the climate change crisis. (https://youtu.be/HzeekxtyFOY) Her address of under 4 minutes was a diamond of unadorned clarity, a challenge to all adults worldwide. In an 11 minute address earlier this year, Greta described her own evolution as a climate change activist while still a child, from: learning about the crisis, to spurring herself into solo public advocacy, and now forcefully challenging national and international politicians to act immediately in response. (https://youtu.be/EAmmUIEsN9A) Greta’s withering criticism of her elders is fully justified because no real action in response to climate change has occurred during the last quarter century, and since Severn Cullis-Suzuki, then 12, issued the exact same critical challenge to the world’s adults, over the course of 6 sparkling minutes, at the Rio de Janeiro summit on climate change in 1992. (https://youtu.be/oJJGuIZVfLM)

We all know what effective action means: an immediate disavowal of capitalism, militarism and imperialism, and the obscene wealth inequities they protect and are motivated by; and the redirection of the human energies, financial treasures and political powers wasted as tribute for the preservation of global rule by the elites of those wealth pyramids, to instead propel a vigorous and unlimited global program of climate change action based on economic equity and climate justice. Basically, Green World Socialism without end (or, till the end).

The only barriers to achieving this social and political transformation of the world are purely mental, not physical: the reluctance in less than perhaps 800 million minds (10.43% of humanity) to relinquish extracting unnecessary and excessive wealth and luxury from the operations of socio-political and economic systems that impoverish, exploit, injure and kill people in the disadvantaged 90% of humanity. What is lacking is a species-wide solidarity among homo sapiens. How do we gain that?

Solidarity arises out of a homogeneity of misery. A steep grading of affluence, along with a media-indoctrinated consensus for devotion to anxiety, acquisition and up-class envy, assures against any outbreak of solidarity. When there can be no thought for the world until the wanted “needs” of me and mine have first been met, we have a societal atomization assuring against any disruption, by enmeshing social solidarity, of our parallel isolated preoccupations. Societal inertia is condensed from the individually encapsulated and blunted awarenesses of people immersed in a regime of economic disparity. Transformative social evolution is simply the fluid mixing of a commonality of experience in the struggle for life within a leveled and even disorganized population.

To meet a species-wide challenge to survival, like climate change, we must first develop a species-wide solidarity. And, our history suggests that for that to happen we must first suffer a leveling catastrophe so the survivors and their successors can marinate in an equality of want for a sufficiently long time until it ferments into tangles of solidarity that eventually connect all human thought. This is how democratic socialism and social democracy emerged in Western Europe after World War II.

Our dread today is that we don’t want to suffer such a leveling catastrophe because it would be a devastatingly painful, tediously drawn out tragedy, and a holocaust undeserved by multitudes of its innocent victims, regardless of how just a retribution it would be against our criminal elite who brought us to this extremity; and we don’t want to suffer through such a catastrophe because the survivors of that purge (maybe you and me?) would have no idea how long they would have to scratch and shift largely alone and unprotected in the pitiless rubble of human society’s destroyed past before mind, spirit and moral character revived and interconnected into a new socially uplifting solidarity. But, that uplift might never occur, and the destruction that begs for it could be terminal. So, how do we break through the paralyzing dread and proceed expeditiously anyway?

We can’t wait for hope; hope follows action. Action must engage without relying on hope because for all we know the geophysical situation may be hopeless, and the social benefits of action would be widespread and immediate regardless of the duration and ultimate outcome of our efforts. Concerns over the financial costs of those efforts are irrelevant because only the social value gained matters. Waiting for some reassuring hope, telegraphed back into the present from the uncertain future, guaranteeing that our careening societal inertia can be finessed with minimal change to its governing prejudices and inequities, so it can then swerve around the geophysical wall our fossil-fueled fate is raising along the entire line of our horizon, is a blind and cowardly stupidity unworthy of our intellectual capabilities.

Some, including me, have wished for a mass popular awakening that erupts into a socialist revolution that then engenders a socially transformative climate change response. Such a response would surge toward the goal of achieving a self-sustaining balance between universal human aspirations and needs, with the enduring processes of Nature that support All-Life. Short of such a miraculous mass satori, I see little prospect of anything beyond a trail of excuses ejected behind our obviously inevitable surprising collision with fate’s wall.

In the absence of a species-wide solidarity, we are left with the prospect of class, race and intergenerational wars erupting out of the struggles for survival during the accelerating calamities of advanced climate change. The young and the striving workers, whose futures and economic viability are being robbed, will be driven by a righteous anger and the courage of those with nothing to lose to rebel and make war against the parasitic fossil-fueled regimes destroying them. Such wars would be heartbreakingly bloody for the rebels against capitalism because of the monopoly on highly technological violence held by the entrenched capitalist powers, a machinery of violence which would be used mercilessly against the much larger impoverished populations in rebellion. It would be like the Vietnam War, perhaps multiply and perhaps globally. Why do I think such gloomy thoughts? Because I have not yet found a major counterexample to the observation by Frederick Douglass (1818-1895) that:

“Power concedes nothing without a demand. It never did and it never will. Find out just what any people will quietly submit to and you have found out the exact measure of injustice and wrong which will be imposed upon them, and these will continue till they are resisted with either words or blows, or both. The limits of tyrants are prescribed by the endurance of those whom they oppress.”

Gaining the 13th Amendment to the U.S. Constitution (the abolition of slavery, exclusive of prison labor) required the bloodletting of the American Civil War (1861-1865). The liberation of so many countries from dictatorial regimes and from colonial exploitation by foreign powers over the last two centuries required tsunamis of blood and long periods of societal torture of the oppressed. And, what of the Yemenis, Palestinians and the Uyghurs, among others today? It seems that Douglass’s dictum will remain a tragic tautology for humanity for some time.

If the capitalist establishment remains intransigent in its embrace of fossil-fueled inequity and acquisitiveness then any determined uprising against it, motivated by both a thirst for socio-economic justice and the mounting of an all-encompassing response to advancing climate change, has the potential to expand into a conflict that could itself collapse civilization in advance of the geophysical termination of planetary habitability for us.

An anti-capitalist and climate change motivated revolution that did triumph after sustaining massive losses over a long war would undoubtedly be morally coarsened by the experience, and their postwar socialist regime might not be as generous and utopian as we could wish for. But none of this need be so. As Greta and Severn have said, we could all just decide to agree and bypass all the “blood, toil, tears and sweat” of resisting, and get the job done.

So, I don’t bother being critical of the many types of advocacy for climate change action that are being tried today, from the confrontational consciousness-raising theatrics of Extinction Rebellion and the Sunrise Movement, to Alexandria Ocasio-Cortez’s political proposal of a Green New Deal, to the articles, books, speeches, sermons and rants by many people, from distinguished to unknown. It’s all good if it tickles our species to wake up, unite, discipline its greedy capitalists and take control of its destiny. However, all these efforts combined have yet to induce government action, so it is obvious that a great deal more “motivation” has to be found or manufactured to spur governments to act now.

The time for our somnambulant capitalist bullshit and our hypocritical navel-gazing narcissism is over. Greta is right to kick us “adults” in the ass. We need to wake up, stop making excuses, unite, and get moving. Act now! 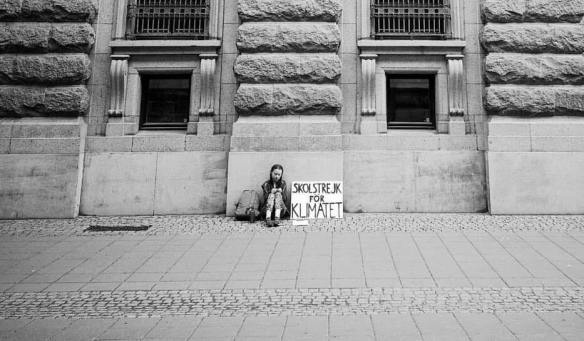 Greta Thunberg alone by the Swedish parliament building, earlier in 2018. On 20 September 2019, 4 million others worldwide, most young people, joined her on the streets in a “School Strike for Climate.” Greta is a most admirable and powerful girl.