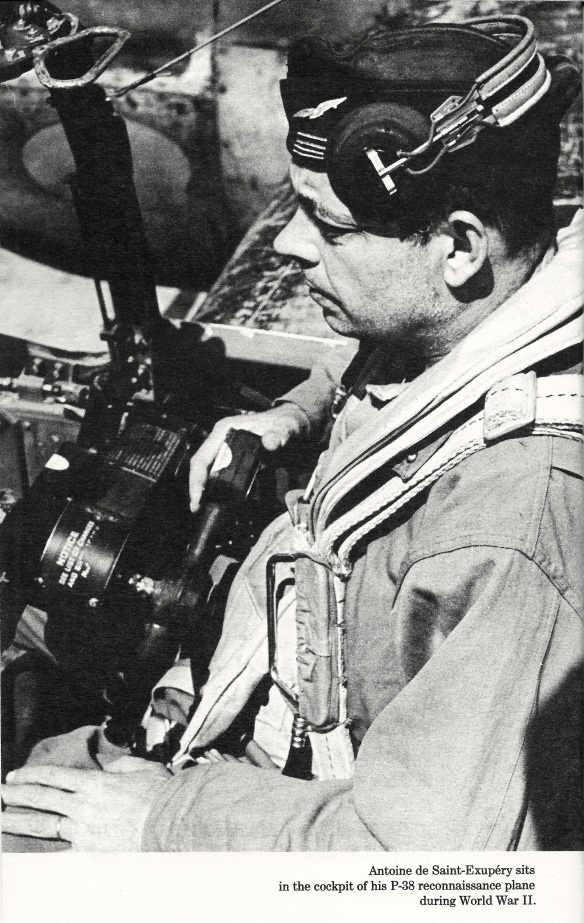 Saint-Exupéry was a successful commercial pilot before World War II, working airmail routes in Europe, Africa and South America. At the outbreak of war, he joined the French Air Force (Armée de l’Air), flying reconnaissance missions until France’s armistice with Germany in 1940. After being demobilised from the French Air Force, he travelled to the United States to help persuade its government to enter the war against Nazi Germany. Following a 27-month hiatus in North America, during which he wrote three of his most important works, he joined the Free French Air Force in North Africa, although he was far past the maximum age for such pilots and in declining health. He disappeared and is believed to have died while on a reconnaissance mission over the Mediterranean on 31 July 1944.

Prior to the war, Saint-Exupéry had achieved fame in France as an aviator. His literary works – among them The Little Prince, translated into 300 languages and dialects – posthumously boosted his stature to national hero status in France. He earned further widespread recognition with international translations of his other works. His 1939 philosophical memoir Terre des hommes (titled Wind, Sand and Stars in English) became the name of an international humanitarian group; it was also used to create the central theme of the most successful world’s fair of the 20th century, Expo 67 in Montreal, Quebec. Saint-Exupéry’s birthplace, Lyon, has also named its main airport after him.

The above three paragraphs (out of many more) are from:

The Little Prince, published in 1943, is estimated to be the 3rd best-selling book ever, with 140 million copies sold.

Today’s blog post was motivated by my reading of Wind, Sand and Stars, a book described as follows:

Wind, Sand and Stars (French title: Terre des hommes, literally “Land of Men”) is a memoir by the French aristocrat aviator-writer Antoine de Saint-Exupéry, and a winner of several literary awards. It deals with themes such as friendship, death, heroism, and solidarity among colleagues, and illustrates the author’s opinions of what makes life worth living. It was first published in France in February 1939, and was then translated by Lewis Galantière and published in English by Reynal and Hitchcock in the United States later the same year.

in the wikipedia article about it:

It is an excellent book. My copy is a 222 page book published by Time-Life Books in 1965, with a preface by “The Editors of Time,” an introduction by Pierre Clostermann (a leading Free French fighter-plane pilot of World War II, who was also a member of the French National Assembly), and the 10 chapters of Saint-Exupéry’s English language version of his book Terres des hommes. Those chapters are titled: The Craft, The Men, The Tool, The Elements, The Plane and the Planet, Oasis, Men of the Desert, Prisoner of the Sand, Barcelona and Madrid (1936), Conclusion.

Chapter 2, The Men, is about the pioneering long-distance air-mail flights (over the Sahara Desert, the Atlantic Ocean and Andes Mountains), exploits, crashes and survival epics of two French aviators active in the 1920s and 1930s, Mermoz, and Guillaumet. Besides being entirely captivated by the romance and adventure of early mechanized flight, they were also entirely committed to expanding the reach of aviation to advance the development of human civilization.

Chapters 6, 7 and 8, Oasis, Men of the Desert, Prisoner of the Sand, involve numerous recollections of Saint-Exupéry’s three years flying over the Sahara, of being stationed at remote desert outposts, and in Prisoner of the Sand (the central story of the book) of crashing in the Libyan Desert and nearly dying of thirst during a four day ordeal of hallucinatory trekking, along with his mechanic Prévot.

Chapter 9, Barcelona and Madrid (1936), is a fascinating eye-witness account of Saint-Exupéry’s time in Republican Spain during the first year of its Civil War, getting close to the fighting, and trying to understand the willingness of simple people to voluntarily risk (and sacrifice) their lives in very sketchy, under-equipped and under-manned operations for the defense of the Republic.

An excellent photo-essay about the Prisoner of the Sand airplane crash, and struggle of human survival, is given at:

The author of the above blog, This Day In Aviation (which is excellent for its topic), Bryan Swopes, has also posted a nice summary (with numerous photos) of Saint-Exupéry’s life;

Saint-Exupéry’s 1935 Prisoner of the Sand experience was the inspiration for his story 8 years later, The Little Prince. Saint-Exupéry’s writing has more of a lyrical-philosophical nature than of a thriller adventure story of the kind adolescent boys (including me) and B-movie producers love. But those more thoughtful musings on the human condition, and on the interactions of strangers from vastly different cultures in the much wider and less-connected world of the 1930s, arose out of Saint-Exupéry’s immersion in the professional life of a remote-country and endurance-flight aviator, and have been the compelling draw to his many aviator-readers worldwide for over 80 years. And one needn’t be an aviator to also fall under the spell of their elegance.

Despite his age and less than ideal health during World War II, Saint-Exupéry managed to gain an assignment with the Free French Air Force as a pilot, flying a F-5B-1-LO unarmed photo-reconnaissance variant of the Lockheed P-38J Lightning twin-engine fighter. On 31 July 1944 he took off from his base on the island of Corsica for a mission in the Rhône Valley. He was never seen again. “In 1998 a fisherman found his silver identity bracelet on the sea floor south of Marseilles. Parts of the aircraft were recovered in 2003.” Bryan Swopes summarizes that day in his brief photo-essay:

As a mechanical device, the P-38 Lightning was a beautiful thing from the perspective of form-following-function, that function being aerial performance. But, sadly, the purpose for that function was to be a tool of war, a killing machine; and from today’s greater appreciation of green energy and the understanding of global warming, the P-38 and all its war-plane kin, past and present, are terribly wasteful carbon polluters relative to the few people they carry and the destructive uses they are put to. Aside from these regrettable realities, I think the P-38 has beautiful lines from every perspective, and I can imagine the exhilarating experience of flying one.

Was Saint-Exupéry shot down on 31 July 1944, or did he experience a fatal mechanical failure? Hard to say, conclusive evidence either way is lacking. Records of Luftwaffe (the air force branch of the German Wehrmacht military forces) operations for southern France at that time are lacking due to their wartime destruction, and the debris patch of Saint-Exupéry’s P-38 is long and wide, and the pieces mostly all quite small, implying a high speed impact on the water. The highly fragmented nature of the debris, along with its corroded state after over 60 years on the sea floor, has made it impossible to detect any bullet holes that one would suppose to exist if a Luffewaffe fighter-plane had shot down Saint-Exupéry’s P-38.

Saint-Exupéry expressed his ethos this way, on pages 126-127, in Prisoner of the Sand, in my edition of Wind, Sand and Stars:

My world was the world of flight. Already I could feel the oncoming night within which I should be enclosed as in the precincts of a temple — enclosed in the temple of night for the accomplishment of secret rites and absorption in inviolable contemplation.

Already this profane world was beginning to fade out: soon it would vanish altogether. This landscape was still laved in golden sunlight, but already something was evaporating out of it. I know nothing, nothing in the world, equal to the wonder of nightfall in the air.

Those who have been enthralled by the witchery of flying will know what I mean — and I do not speak of men who, among other sports, enjoy taking a turn in a plane. I speak of those who fly professionally and have sacrificed much to their craft. Mermoz said once, “It’s worth it, it’s worth the final smash-up.” 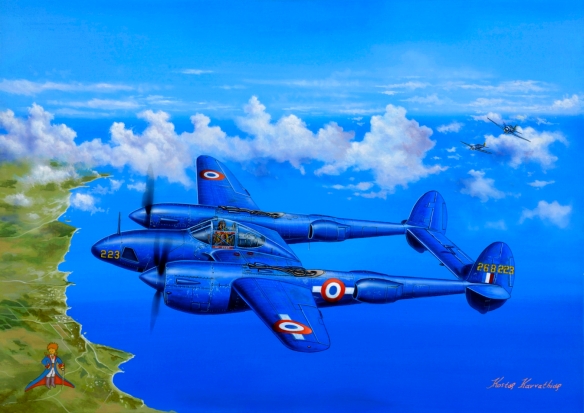