Many Americans are confused, conflicted and concerned about how and for whom they should vote by 3 November 2020. I say “by” because we all have the option to vote by mail, even though that option is imperiled in much of the country by campaigns of voter suppression and mail tampering by the crooks, criminals, cranks, crack-pots, conspirators, conspiracists, con-men and con-molls of the Trump mind-pithed death-cult.

The United States is not a country of overwhelmingly democratic sentiment. It was, after all, founded by a propertied and slave-owning White Male grande bourgeoisie resistant to colonial taxes imposed by 18th century Imperialist England; and it has resisted every popular social movement since to expand the franchise to life, liberty, prosperity, equality under the law, freedom of self-expression, and participation in democratic governance.

It is a country with the most propagandized population on the face of the Earth, ruled by a corporate-owned political class of mediocrities whose worship of power reveal their deepest instincts to be authoritarian, materialistic, careerist, sexist, white supremacist, and xenophobic. As a result, the “right to vote” is a precious commodity however unevenly it may be available and however tenuously it may affect the course of governance in favor of the public good.

The way for a citizenry to safeguard and expand any right they have been granted by their government is to use it massively, often and vigorously, even when the expectation of its transformative power is low. Today, the single best possibility for approaching a socialist-inspired revolution in the United States would be the overwhelming participation in knowledgeable voting by young Americans; those between the ages of 18 and 44, and most particularly those between the ages of 18 and 30. They should “all” register to vote, learn the realities about the available candidates, and vote carefully — not lackadaisically — at every opportunity available to them, so as to advance their interests which are uniformly: anti-war, anti-capitalist, anti-discriminatory, anti-sexist; and socialist, environmentalist, responsive to the global warming climate crisis, and thus most widely beneficial to the overall public good. 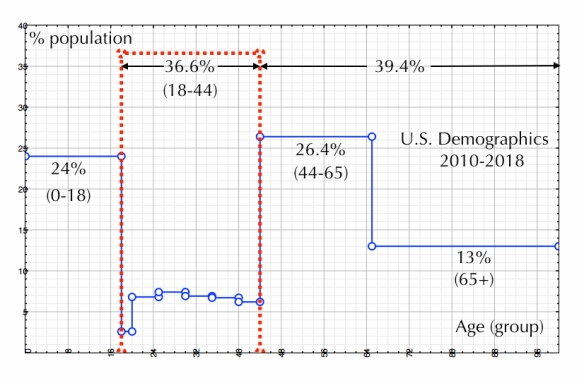 What young Americans need to do in their own economic, political and social interests is to massively, knowledgeably and consistently vote despite having realistically low expectations of any rapid and significant socialist improvements resulting from any given U.S. election. Persistence is required for this “water on stone” process of national transformation.

Youthful outbursts of violent and destructive frustration in reaction to the intransigence of the status quo will be quickly quenched by far superior government firepower (applied with far lower moral restraint); and youthful surrender by escapism into sensory bubbles will simply mire them more deeply in the control and exploitation mechanisms of the ageist ‘corporatocracy’ managing national affairs.

If young Americans can coalesce on a generalized socialist vision and stick with it even as they age, and they persist in applying that vision through their social practices and through the legal yet highly flawed mechanisms of voting in the United States, they would be able to shift the direction of all national policies.

It is important to remember that not all older voters are reactionaries, many of us still retain the dreams and visions of our glory days even if we appear to be feeble wrecks incapable of implementing anything. So the central cohesive element needed for a socialist transformation of the U.S. political economy is a strong popular and continuing socialist mindset — and thus allied progressive civic movements — among America’s young people.

The difficulty in sustaining such a socialist youth movement today is the obvious disincentive given by the nearly-guaranteed piss-poor results of U.S. electoral politics. We all know this is civic failure by design to maintain corporate-funded political corruption administered by careerist mediocrities. Rooting out that cancer will take a long time, perhaps an eternity (that is to say till human extinction). But offering it no resistance would be the ignominious suicide of human decency and our public moral character; and such resistance must necessarily be a multi-generational effort.

So I say vote we must even though it stinks. Offering American youth incentives of utopian hopes as likely outcomes from electoral “victories” in November of 2020, is dishonest. What is honest is telling them to be steeled by Raymond Aron’s observation that: the choice in politics is never between good and evil, but between the preferable and the detestable. Most of the time in U.S. elections we are not offered the opportunity to choose what and who we really want, we are only offered a very constrained set of options that range from the truly detestable to the relatively preferable.

What I see as the greatest failure of civic insight among American voters is them being overwhelmingly identity voters. Most people vote for reflections of themselves — really for reflections of their self-illusions — instead of for “imperfect” candidates of integrity committed to policies aimed at the overall public good. Identity politics is the greatest propaganda coup ever perpetrated on the American public by the American capitalist ‘corporatocracy.’

The drumbeat to vote for who looks like you and sounds like you and feels like you, or like your avuncular uncle, or like your wise and feisty aunt — without a thought as to who actually owns these candidates or what they are financially obligated to actually do and not do once elected — is unrelenting and earsplitting. Just turn on your TVs and computer mass-media streams and you get inundated by that propaganda.

The second greatest failure I see among progressive American voters is the inability of many of them — by their unwillingness — to be pragmatic when it comes to voting. Voting is a gross, slow, cumbersome and inaccurate tool for social change and improvement. It entirely lacks the sharp rapid elegance of a skillfully deployed scalpel (and the political equivalents of scalpels are bloody revolutions, which are more often tragic catastrophes), and it lacks the sustained political pressure of continuing mass movements.

Yes, it is easily possible to have a very far advanced socialist ideal in mind when voting, but no your co-visionary utopian political aspirants and microscopic political parties have no statistically significant probability of gaining any political power. So voting “for them” is purely an act of politically ineffectual egoism: you voted for your self-image. You will feel good about it, and that’s all. Voting for the country means getting over yourself. This is a major hurdle among people indoctrinated since infancy to mindless selfishness — and individualistic “exceptionalism” — by mass media in the service of your exploitative capitalist overlords.

In 2020, Americans have a civic duty and moral obligation to dethrone the Trump and Republican malignancy. Doing so will not immediately usher in a New Socialist Millennium, nor a United Federation of Planets, not any scintillating utopian fantasy of fully enlightened government. It will just be a necessary first step to a long, long projected recovery of political decency in this country. To accomplish that step — and the many needed after it — we have to accept reality, defy the propaganda, get over ourselves, persist in our socialist mass movements acting for political reform and the good of all, and persist in our voting despite its many deficiencies.

So far as I can tell, for the first time in its 208 year history The New England Journal of Medicine, one of the most prestigious peer-reviewed medical journals as well as the oldest continuously published one, has editorialized to endorse an electoral choice in a U.S. election: vote Trump and his partisans out. [3]

They begin that editorial with:

“Covid-19 has created a crisis throughout the world. This crisis has produced a test of leadership. With no good options to combat a novel pathogen, countries were forced to make hard choices about how to respond. Here in the United States, our leaders have failed that test. They have taken a crisis and turned it into a tragedy.”

The list of particulars that follows from this point in the NEJM indictment of the Trump Administration and its allied state government partisans is clear and damning (more than 200,000 Americans have died from Covid-19, a number equivalent to half the American fatalities in World War II); after which they conclude with the following:

“Anyone else who recklessly squandered lives and money in this way would be suffering legal consequences. Our leaders have largely claimed immunity for their actions. But this election gives us the power to render judgment. Reasonable people will certainly disagree about the many political positions taken by candidates. But truth is neither liberal nor conservative. When it comes to the response to the largest public health crisis of our time, our current political leaders have demonstrated that they are dangerously incompetent. We should not abet them and enable the deaths of thousands more Americans by allowing them to keep their jobs.”

Given human nature, there will always be new generations of fascists, bigots, religious fanatics, capitalists, careerists, exploiters, would-be slavers and criminals in American political life. So there can never be an enduring final victory of political good over political evil. To socialize a capitalist society, especially one as militarized, regressive and imperialistic as that of the United States, would take much more than just voting. The effort to advance American societal decency must necessarily be a continuing process of indeterminate duration.

Our utopian socialist visions should be used as compass needles to point our efforts past ourselves and in the direction our grudgingly pragmatic and personally imperfect steps should take on the way to that far horizon of our aspirations.

I have already mailed in my ballot. I wish more of my choices could have been reflections of how I like to think of myself, but “you can’t always get what you want.” [4]

[1] Demographics of the United States
https://en.wikipedia.org/wiki/Demographics_of_the_United_States

[2] Population of the United States (2020 and historical)
https://www.worldometers.info/world-population/us-population/

[4] You Can’t Always Get What You Want
https://youtu.be/krxU5Y9lCS8